SUPER Recruiters in the news

The Future Fund, BlackRock, National Australia Bank (NAB), Westpac and Vanguard are the financial services institutions with the most favourable public sentiment, according to research from Super Recruiters’ Network Investor Perception Ranking.

Despite negative media coverage, the Future Fund’s medical research fund and aboriginal activities strongly contributed to an increase in brand equity, while NAB’s sponsorship of the AFL helped increase its general perception.

Cathy Doyle, SR Network and Super Recruiters chair, said: “The research ranked major fund and superannuation managers along with the big banks in order of how investors and the wider public perceive them”.

“Up until now, it has been hard to identify let alone measure investor perception,” Doyle said.

“Artificial intelligence is making that much easier and can apply a real time and even forward-looking measure of the importance of public perception to make more informed decisions, asset by asset.

“This is the column on the spreadsheet that many fund managers have been looking for.” 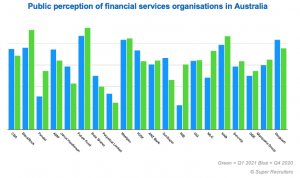